In the increas­ingly differ­en­tiated social sciences, more and more researchers from different disci­plines are engaged in the process of European integration and European politics. Special­ization, however, aggra­vates contro­versial debates on research questions from different perspec­tives. Yet there is a shying away from the service of trans­lation between different disci­plines, necessary for successful inter­dis­ci­plinary exchange. The fact that this clearly weakens compre­hensive debate within disci­plines – or at least in German political science – is not only regret­table, but detri­mental to research.

Given the multiple crises facing the European Union, there are also numerous initia­tives that deal with visions for Europe, and that have published their own position papers. Here, too, there is no overar­ching debate, which is more necessary than ever before in light of the European skeptics’ growing influence on the political agenda. Individual projects are emerging from the presented positions, but a joint initiative has so far been missing. This is now, at least, being bemoaned.

Discus­sions at the Jungen Wissenschaftlichen Direk­to­riums des Instituts für Europäische Politik (IEP) have shown that IEP and Arbeit­skreis Europäische Integration (AEI) are not alone in this assessment. There is, according to the partic­i­pants of the discus­sions, potential to intensify cooper­ation towards a better Europe, both within academia as well as between academia and civil society. However, it is not enough to network repre­sen­ta­tives from various sectors in order to create an enduring platform for this exchange. A network for its own sake cannot last. According to the JuWiDi, in order to establish such a system, the active partic­i­pants must set a common goal towards which they will work. In this regard, the Europawis­senschaftliches Netzwerk Deutschland (END) and the Junges Europawis­senschaftliches Netzwerk (JEN) will serve as their common platform.

What might a common goal and vision for the future of Europe look like? What topics would such a vision need to address? What methods should be applied? The Institute for European Politics (IEP) set out to answer these questions by launching the project “Alter­native Europa!” together with the Junges Europawis­senschaftliches Netzwerk (JEN) of the Europawis­senschaftlichen Netzwerks Deutschland (END) and the European Academy in Otzen­hausen (EAO) in cooper­ation with the Arbeit­skreis Europäische Integration (AEI), the Centre inter­na­tional de formation européenne (CIFE), the Junge Europäische Föder­al­isten (JEF), the project “TruLies: The Truth about Lies on Europe”, Polis 180, the University of Hamburg and the University of Hildesheim.

In the kick-off workshop, working groups have been formed to look more closely at visions for the future in specific policy areas. The working groups form the core and the basic structure of ALTEU!

Project Manifesto (only available in German)

Discussion Papers of “Alter­native Europe!” (only available in German)

Invitation to the networking meeting on June 26, 2018 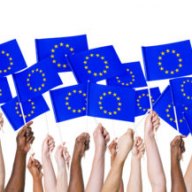 Only recently, our cooper­ation project Alter­native Europe! received the Europe Prize “Blue Bear”, which is awarded by the State of Berlin together with the Repre­sen­tation of the European Commission in Germany to Berliners who are committed to the European idea …

Civil Dialogue: For a Europe of the Future?! Is there a European Identity? 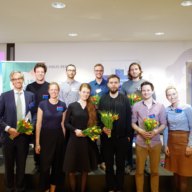 On the day of Emmanuel Macron’s first speech to the EU Parliament, in which he called for a re-devel­opment of the EU, the Repre­sen­tation of the European Commission in Berlin provided a platform for young politi­cians of five different German …

Manifesto for the Future of Europe and the Related Discussion Papers 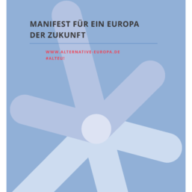 On 7 and 8 December 2017, this year’s final conference of the project “Alter­native Europa!” took place at the German Archi­tecture Centre (DAZ) in Berlin. The primary aim of the conference has been the discussion of the common manifesto for … 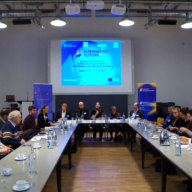 We have used the year of the 60th Anniversary of the Treaty of Rome together with Polis180, the Young European Feder­alists, Europäische Akademie Otzen­hausen and many other partners, to strengthen and sharpen the European consciousness especially among junior researchers, civil …

Second Future Workshop as part of the project “Alternative Europe!“ 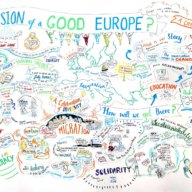 The Institute for European Politics (IEP) and Polis180, together with numerous European research and civil society organ­i­sa­tions, are devel­oping a manifesto of visual­i­sa­tions for Europe, as part of the project “Alter­native Europe!”.

After the first Future Workshop in the European …