Think tanks play a central role in the strength­ening of the Ukrainian state by crucially contributing to the promotion of a plural­istic and democ­ratic society through their valuable research.  In order to profit from the potential influence of Ukrainian think tanks both on politics in Ukraine and on the European discourse, experts highlight the need to expand their compe­tences and integrate them in European networks.

This is precisely the purpose of the project “Think Tanks in Ukraine: Strength­ening expertise and promoting European cooper­ation”, imple­mented by the Institut für Europäische Politik, Berlin, in cooper­ation with the Ilko Kucheriv Democ­ratic Initia­tives Foundation, Kyiv, and supported by the German Federal Foreign Office. The central objec­tives are the devel­opment of insti­tu­tional compe­tences of Ukrainian think tanks and the promotion of their expertise. Concur­rently, the project strives to contribute to the strength­ening of compe­tences on Ukraine in Germany. By providing a platform for the dissem­i­nation of Ukrainian expertise through a series of publi­ca­tions, the IEP and its partners hope to shape and inform the German and European public discourse.

To these ends, inter­views with experts in Germany and Ukraine on the situation of Ukrainian think tanks will be conducted, the results of which will be published online. These also provide the basis for the imple­men­tation of workshops for repre­sen­ta­tives of Ukrainian think tanks, which will aim to enhance knowledge on writing academic publi­ca­tions, improving advocacy work, and strength­ening public relations work as well as fundraising. The partic­i­pants will subse­quently apply their newly acquired knowledge and skills to write policy papers on topics like the Eastern Partnership, Associ­ation Agreement and reform process in Ukraine, which will be published in German and in Ukrainian in an online publi­cation series. The results will be presented on a press conference in Kyiv and during a round table in Berlin.

Eighth interview of the “Klartext” series: Economic analyses for Ukraine and beyond

As part of the project “Platform for Analytics and Inter­cul­tural Commu­ni­cation” (PAIC), the eighth interview in the “Klartext” series with Ukrainian think tanks has just been published. This time around, Dmytro Boyarchuk, Economist and Executive Director of the think tank …

A new policy paper by Sergiy Zayets, Regional Centre for Human Rights (Kyiv), on “Imposition of Citizenship as a new Human Rights Violation and a Means of the Aggressive Expansion by the Russian Feder­ation in the Context of the Occupation …

A new policy paper on “Commu­ni­ca­tions Strategy as an Instrument for the Reinte­gration of the non-government controlled areas of the Donbas“ has been released in the framework of the project “Think Tanks in Ukraine: Strength­ening expertise and promoting European cooperation“. …

Study on “Think Tanks in Germany and Ukraine: Differences and Perspectives for Cooperation” and infographic released 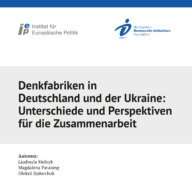 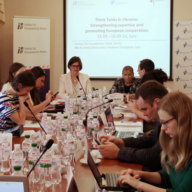 On the 15th and 16th September, the Institut für Europäische Politik (IEP) and the Ilko Kucheriv Democ­ratic Initia­tives Foundation (DIF) conducted a workshop in Kyiv in the framework of the project “Think Tanks in Ukraine: Strength­ening expertise and promoting European … 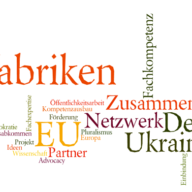 The IEP’s new project “Think Tanks in Ukraine: Strength­ening expertise and promoting European cooper­ation” focuses on Ukrainian think tanks and will be jointly imple­mented with the partner organi­zation Ilko Kucheriv Democ­ratic Initia­tives Foundation, Kyiv, and is supported by the German …