Ukrainian think tanks play a key role in the devel­opment of the Ukrainian state, and constitute a bridge between politics and society. As one of the main actors in Ukraine, think tanks exert an effective influence on policy-making processes through their work. The Euromaidan in 2014 has marked a turning point for Ukrainian think tanks as these protests consid­erably increased the demand for high-quality analysis about processes in Ukraine in both domestic and inter­na­tional environ­ments. In order for Ukrainian think tanks to exert most influence on national policy as well as on the European discourses, Ukrainian experts underline the necessity of expanding their profes­sional compe­tences and of a closer integration into European networks. At the same time, it is essential to consider inter­cul­tural differ­ences as well as the situa­tional context in order to detect and prevent possible barriers to cooper­ation with foreign partners.

These issues are addressed by the project ‘Platform for Analytics and Inter­cul­tural Commu­ni­cation’ (PAIC), which is organized by the Institute for European Politics (IEP, Berlin) in cooper­ation with the Ilko Kucheriv Democ­ratic Initia­tives Foundation (DIF, Kyiv), and the think tank Initiative think twice UA (Kyiv), with the support of the German Federal Foreign Office. More precisely, the project aims at the promotion of profes­sional skills among Ukrainian think thanks, the creation of synergies between Ukrainian and German think tanks, the transfer of knowledge about processes in Ukraine to Germany, the strength­ening of Ukraine expertise among junior researchers in Germany and the trans­mission of inter­cul­tural compe­tencies, which are essential for a successful cooperation.

The above-mentioned objec­tives will be realized within the period of 01.07.2018 to 31.07.2019 through imple­menting a series of activ­ities in Germany and Ukraine:

This project builds upon the results of the study ‘Think Tanks in Germany and Ukraine: differ­ences and perspec­tives for cooper­ation’, conducted within the framework of the preceding project in 2016 ‘Think Tanks in Ukraine: strength­ening expertise and promoting European cooper­ation’ and the experi­ences from the PAIC project phase in 2017/2018.

The project „Platform for Analytics and Inter­cul­tural Commu­ni­cation” (PAIC) is kindly sponsored by: On 25 June 2019, our 13th Ukraine Breakfast Debate on “Economic Challenges amidst a Changing Government: Will Ukraine Become More Open for Business?” took place within the framework of the project “Platform for Analytics and Inter­cul­tural Commu­ni­cation” (PAIC) in cooperation … 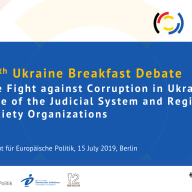 Since the Revolution of Dignity, the population showed an increasing demand for the reform of the judicial system and the fight against corruption. A major role in this reform process is played by civil society organi­za­tions who advocate and monitor …

From 10 to 15 June 2019, six experts from Ukrainian think tanks, NGOs and research insti­tutes took part in the study trip “Between research and politics: How do think tanks shape policy-making in Germany?” to examine the role of research …

Call for Applications: Skills Workshop on “Research in Think Tanks: Developing Your Own Research Design” 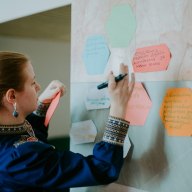 Young researchers and analysts working in Ukrainian research insti­tu­tions and think tanks are warmly invited to apply for the workshops “Research in Think Tanks: Devel­oping Your Own Research Design & Quali­tative Data Analysis” which are taking place in Kharkiv, 14/15 …

11th Ukraine Breakfast Debate: “Civil Service Reform in Ukraine: How to Change the Rules of the Game?” 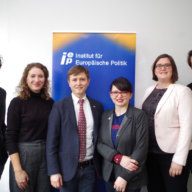 A holistic reform of the civil service culture is one of the most important and pressing tasks that Ukraine is facing at the moment. A renewed and independent civil service serves as a crucial basis for a successful and sustainable …

Eighth interview of the “Klartext” series: Economic analyses for Ukraine and beyond 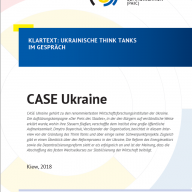 As part of the project “Platform for Analytics and Inter­cul­tural Commu­ni­cation” (PAIC), the eighth interview in the “Klartext” series with Ukrainian think tanks has just been published. This time around, Dmytro Boyarchuk, Economist and Executive Director of the think tank …