Germany and the United States are facing similar, still unresolved challenges in the post-soviet space, such as the ongoing crisis and conflicts in Ukraine or the growing political insta­bility in the Republic of Moldova. The new project: “German-American Dialogue on the Post-Soviet Space: Assessing the State of European Integration and Potential for Transat­lantic Cooper­ation – the Case of Moldova” seeks to foster a transat­lantic dialogue on the post-soviet space and is imple­mented in co-operation with the German Marshall Fund of the United States (GMF).

The project aims at reviewing policies and instru­ments of Germany, in the framework of the European Neigh­bourhood Policy and the Eastern Partnership and those of the U.S. with respect to their capacity to support trans­for­mation processes in the post-soviet space. It seeks to create synergies between German and American approaches to the region and to identify the specific domestic obstacles to trans­for­mation within the countries of the post-soviet space.

Within a series of four dialogue workshops, to be held in Berlin and Washington, the exchange between repre­sen­ta­tives from the U.S., Germany and other European countries and the target countries of the Eastern Partnership will be promoted. The results of each dialogue workshop will be published within a review-document.

The German-American Dialogue is funded by the Transat­lantic Program of the Government of the Federal Republic of Germany.

Policy Paper: Challenges and Perspectives for a Sustainable Transformation in the EU’s Eastern Neighbourhood 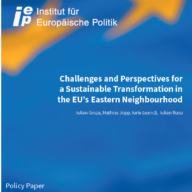 The policy paper aims to make an assessment of the impact of the Eastern Partnership (EaP) on the reform processes in the EaP countries, with a particular focus on the associated countries and to address in more detail the major …

German-American Dialogue on the Post-Soviet Space: “From ambition to pragmatism?” 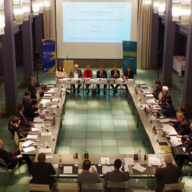 On 28 and 29 November 2017, the fourth workshop of the German-American Dialogue on the Post-Soviet Space was held, in cooper­ation with the German Marshall Fund of the United States (GMF) in Berlin on the topic of “From ambition to …

Third workshop of the German-American Dialogue: “Transatlantic Cooperation in the EU’s Eastern Neighbourhood” 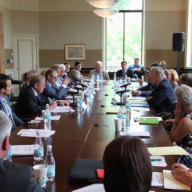 From 14 to 15 June 2017 the third workshop of the German-American Dialogue on the Post-Soviet Space was held at the premises of the German Marshall Fund of the United States (GMF) in Washington D.C., under the title: “Transat­lantic Cooperation …

Research Paper published: “Assessing the State of European Integration and Potential for Transatlantic Cooperation in the Post-Soviet Space: The Case of Moldova” 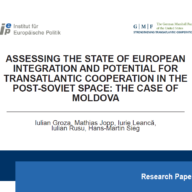 The research paper assesses the state of affairs of the transat­lantic cooper­ation to support trans­for­mation processes in the Republic of Moldova, as a case study for the post-Soviet space. The authors review the course of European integration and reform processes …

Second workshop of the German-American Dialogue: “Supporting transformation in the EU’s Eastern Neighborhood – A test case for European integration and transatlantic cooperation” 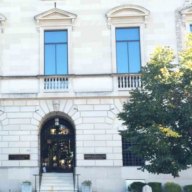 From September 26th 27th the second workshop of the German-American Dialogue on the post-Soviet space was held in Washington D.C., under the title: “Supporting trans­for­mation in the EU’s Eastern Neigh­borhood – A test case for European integration and transat­lantic cooper­ation”. …