In the face of the ongoing economic, monetary and financial crisis in Europe, citizens, politi­cians and academics increas­ingly discuss the costs of the European Union. The value of Europe, however, seems to remain unrec­og­nized within this discussion. As a result, the IEP sets out to contribute to this debate by focusing on Europe‘s value from a broader perspective by: launching a study, planning several events and publishing in order to reach a wider public.

Despite many success stories of the European Union, the revived resent­ments against the EU are difficult to overcome and raise the fear that this might lead to a split of the Community in the near future. Given the current circum­stances, it is necessary to conduct a study which analyses both the benefits of the European Union and the costs that the citizens have to pay in order to be a member of it. “What are the costs of Europe – what is its value?” – this is the theme that shall guide a number of small projects launched by the IEP that intend to enhance the public debate on Europe’s value.

The IEP is currently working on a study that deals with the social, political and economic value of European integration in Germany and its citizens. The study is funded by the Stiftung Mercator and focuses mainly on the immaterial value of Europe. Areas that are more closely scruti­nised include: European citizenship, the normative values of the European Union, the politics of migration, energy, the climate and environment, internal security, enlargement and European neigh­borhood policies. Regarding the material and external dimension, the value of the internal market, the euro area, regional politics and the common foreign and security policies of the European Union are examined.

A study group including in-house researchers from the Institut für Europäische Politik, as well as external experts, is currently working on the study, which will be published in May 2013.

Podium Discussion at the EU Info Center in Montenegro 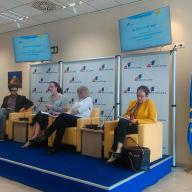 On Tuesday, 5 May 2015, a podium discussion took place at the EU Info Center in Montenegro. In this context IEP colleague Dr. Funda Tekin together with Gudrun Steinacker, German Ambas­sador in Podgorica, and Prof. Gordana Djurovic were discussing different …

Disseminator Workshop “The Value of Europe” 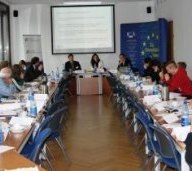 The study: „The Value of Europe“ by the Institut für Europäische Politik was presented and discussed during a workshop for dissem­i­nators on 15 October 2013 in the European Commission Repre­sen­tation in Berlin. The aim of the workshop was to discuss …

Professor Dr. Mathias Jopp, Director of the IEP, has wrote an article for the magazine 51° of the Stiftung Mercator dealing with the topic: „Recog­nising Europe’s value.“ In the article, Jopp criti­cizes public debates that focus mainly on the costs …

Second Meeting of the Study Group “The Value of Europe” 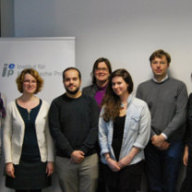 After the first meeting in October 2012, the study group on “The Value of Europe“ met for the second time on 13 December 2012 at the Institut für Europäische Politik. The expert group seeks to determine the value of Europe …

IEP-Lunch Debate with Steffen Kampeter: „What are the costs of Europe – what is its value?“ 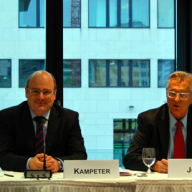 On 22 October 2012, Steffen Kampeter, MdB (member of the German Bundestag) and Parlia­mentary State Secretary at the Federal Minister of Finances, gave a speech on the topic: „What are the costs of Europe and what is its value?“ within … 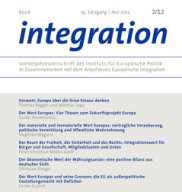 The Federal Foreign Minister of Germany, Guido Wester­welle, opens issue 2/2012 of integration with a clear commitment to Europe. He believes that turning away from the project of integration would be a folly, especially for Germany. Consid­ering the growing doubts …