At the initiative of the European movements in Hungary and Germany, and under the leadership of the Institut für Europäische Politik, the first German-Hungarian Forum was conducted in June 1991 with the support of the then heads of government, József Antall and Helmut Kohl in Budapest. The German-Hungarian Forum is now one of the most important insti­tu­tions in the societal dialogue between Germany and Hungary. The aim of the forum is to discuss current issues of the social and economic devel­opment of both countries in an open dialogue, and to find common responses that also take into account the demands of European integration.

The German-Hungarian Forum is a platform for all social groups. As a bilateral dialogue initiative, it promotes the exchange of ideas and experi­ences between repre­sen­ta­tives and experts from politics, business, culture, science and civil society in both countries. Objec­tivity and no political party bias are among the funda­mental principles of the activ­ities of the Forum. Due to the impor­tance of the Forum for bilateral relations, the government- and in particular the Foreign Ministries of both countries- have from the outset promoted its work at the highest level.

The Forum is grounded in a bilateral partnership agreement between the two countries in February 1992.

“The contracting parties shall support the activ­ities of the German-Hungarian Forum. They welcome its efforts, involving all repre­sen­tative political and social forces in Germany and in Hungary, to construct ideas for the further devel­opment of German-Hungarian relations and to take appro­priate initiatives.”

The German-Hungarian Forum has since then become an integral part of the bilateral relations between the two countries.

The President on the German side of the German-Hungarian Forum is Elmar Brok, MEP.

Honorary President: Otto Wolff von Amerongen †. The main supporters of the forum are the Institute for European Politics in Berlin (Coordi­nation: Dr. Katrin Böttger) and the Hungarian Council of the European Movement in Budapest. The activ­ities of the German-Hungarian Forum are supported by the Foreign Office in Berlin. 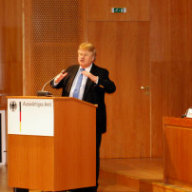